Before I answer that question, let me tell you about someone else?

Think back to where you were at age 10. Primary six? JS 1? Studying for common entrance to get into Abadina or Federal Government College? Or maybe you were the posh one. You wanted to get into ISI. At that age, Zuriel Oduwole was on the pages of Forbes Magazine. Think back to where you were at age 12. That’s where she is now. The difference is that she has interviewed Presidents and Prime Ministers of 15 countries: President Uhuru Kenyatta, President Jerry Rawlings and John Kuffour, both of Ghana, Presidents of Jamaica, Mauritius, Tanzania, among others. She has interviewed Aliko Dangote, Venus and Serena Williams, Reverend Jesse Jackson. She is the youngest person ever to have produced a movie that was shown in a cinema at age 11. New Yorks Magazine Business Insider awarded her as the Most Powerful 11 year old in the world last year. What will it take for that to have been me? 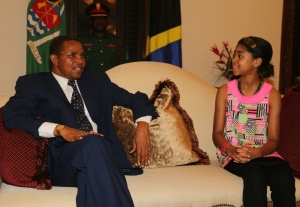 Before you convince yourself that these two people were born special, let me quickly inform you that Dayo used to hawk on the streets of Lagos. He lost his father at the age of 11 and his mother was poor. So, what has it taken?

They say success happens when opportunity meets preparation. There will always be opportunities, but will you ever be prepared? Nigerians have been shitting in public for decades; shot puts, flowing water, road side, and for the “too blessed to be stressed ones”, the tantalizers or bank toilets, but that shit was all it took for Otunba Ghaddafi to generate millions in naira when he started installing mobile toilets. Shit was all it took.

Nigerians need food every day, need clothes every day, need water, air, hope, education, power for their phone, something to mark the last page they read in a book or something to shock the door that won’t stop closing. That door that won’t stop closing was all it took for Farrah Gray at the age of 9, as he picked stones by the way side, painted them and sold them as door stoppers till he became a millionaire in dollars by selling things that you and I will have stepped on or even kicked on the road. What will it take for me?

I don’t remember much of my childhood, but I remember my Nursery two classmate reporting me to my mother, ‘Sanmi’s mummy, see, Sanmi can sleep too much. He can even sleep on the swing’. I always believed that he lied against me until recently when I slept off on an okada. Sleeping is not a problem because it allows us dream, but that exactly is our problem because we never get to the point of waking up from the dream to actually make it come alive. We make plans, nurture them, dream about them but because we sleep too much, our plans always remain as dreams.

Dayo had the excuse of his father’s death at the age of 11. Otunba Ghadaffi had the excuse of what his friends will say about him doing shit business. I’ve had the excuse that my secondary school mates graduated from University 3 years before me. But in my few lucid moments, I remember that when names are to be written in ink or in gold, when our graves are dug and tributes are to be said, when a roll call of the world’s passengers is being taken, what will I have gathered? Very good excuses or very good achievements?