House of Dabira is a fashion line owned by Inioluwa Ajayi. Ini hails from Irepo Local Government in Oyo State. The young fashion designer and entrepreneur is a 300L Law student in University of Ibadan, Ibadan.

Amiable, adorable and beautiful as she is, Inioluwa has carved her niche as a strong woman of many virtues, birthing her own fashion line amidst huge challenges at the home front, educational pressure and even peer influence. She derives her inspiration from natural things, physical objects and intangible ideas. The extent of her creativity has been considered matchless as she sees no boundaries to fashion and cloth designs.

House of Dabira is just Five (5) months old and it featured at the Nigeria Television Fashion Show at the Federal Palace Hotel, Victoria Island, Lagos in February and recently featured again on the 18th of March 2012 for Dreams Come True with Jazzy B in Ibadan. 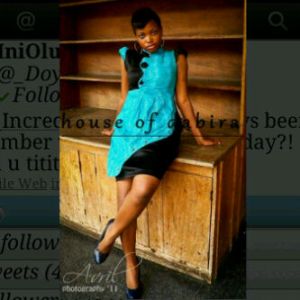 Reliable sources reveal that each dress was sold from 4000 Naira and above after the fashion show.
In a recent interview with d rising fashion icon, she said that in 5yrs from now, she would have expanded House Of Dabira beyond Africa and have a really huge client base.